In the footsteps of the great nomads 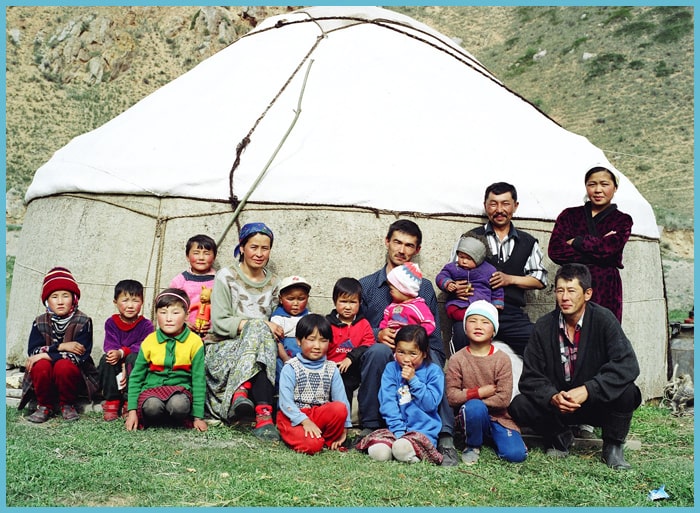 The name of tour: In the footsteps of the great nomads

Quantity of the days: 12 days

Day 1: Bishkek - Ala Archa - Bishkek
Arrival to Manas International Airport your guide will meet you and you will transfer to Bishkek capital of Kyrgyzstan. You will drive about 30 minutes from airport to Bishkek. This day is dedicated to a city tour of the wonderful capital. The tour route will lead you to the best attraction such as: Pobeda Square (Victory Square), Duboviy Park (Oak Park), Central Ala-Too Square, Old Square, National Philharmonic, and many other highlights. In the second part of the tour you will drive to amazing Ala Archa gorge. This amazing gorge is located 45 km from Bishkek. a favorite place for residents of the country, as well as tourists. Many people come here to see the beautiful mountain peaks, the variety of coniferous and spruce forests interspersed with rivers and mountain landscapes pleases the eye. In course of the tour you can hike to reach the panoramic view. Then you will be transferred to Bishkek. Night will be in the hotel.

Day 2: Bishkek - Burana - Chon Kemin
After breakfast you will lead to our Asian Bazaar. Many tourists love this place for the noisy rows of goods, merchants who invite customers and can make a good discount. You can take great photos and buy souvenirs. Then you will transfer to Chon Kemin gorge. Along the way you will explore the ancient minaret Burana Tower the minaret of the XI century is one of the first structures of this type on the territory of Central Asia.  You will also explore nearby an open air museum of Balbals (stone statues). Then you will continue your driving to fascinating Chon Kemin Gorge. In the second part of the day you will have a chance to ride a horse about 3 hours. The tour route will take you to the mountains and you will admire the amazing views of the gorge and breathe fresh high mountain air. You will spend the night in a home stay.

Day 3: Chon Kemin - Issyk Kul lake northern shore - Karakol
This day you will hit the road to divine Issyk Kul Lake, a truly unique creation of nature in Kyrgyzstan, where healing power and divine beauty are harmoniously intertwined. The lake is located at an altitude of 1608 meters, inside a picturesque ring of mountain ranges with eternal snow on the tops, and, nevertheless, it does not freeze all year round. About 80 rivers flow into it and none flow out, the maximum depth is about 700 meters, and the width is 70 km, the length is 180 km. You will have a chance to go to the lake and take photos. After you will continue driving to along northern shore and direct to Karakol town. On the way you will visit ancient stone patterns - petroglyphs. After arrival to  Karakol you will discover the Dungan mosque. This is a real masterpiece of Dungan architecture, built without a single nail. After you will visit an old wooden Orthodox Church. The overnight is in the guest house.

Day 4: Karakol - Jeti Oguz - Issyk Kul southern shore - Kochkor
Today you will have adventure to Jeti Oguz gorge. Jeti Oguz is translated from Kyrgyz as "Seven Bulls". The picturesque gorge was so named because of the red sand rock formations covered with spruce forests. En route you will observe the Broken Heart Mountain. In course of the tour you can climb up and overlook the mesmerizing view of the gorge. After you will continue travelling with driving to Bokonbaevo village, you will know interesting facts where we will meet a local eagle-hunter. He hunts hares and foxes with the help of eagles (a traditional way of nomadic hunting). Night is in a home stay.

Day 5: Kochkor - Son Kul
In the morning you will drive to amazing Son Kul Lake. This is the second largest lake in Kyrgyzstan. It measures 22 km long and 16.5 km wide. Many mountain rivers flow into the lake, but only one flows out - the Son Kul River. The lake is located at an altitude of 3013 meters above sea level, the water in the lake is fresh. Mountains perfectly surround the lake as in a bowl. In summer, locals come to the lake to enjoy the mountain air, to relax. Also here in the summer they bring cattle to pasture. Upon arrival to the lake you will enjoy the nature, take photos, walk along it beaches. You will spend night in yurts. A Yurt is a national dwelling of the Turkic and Mongolian peoples, which has a frame base and is covered with felt.

Day 6: Son Kul - 33 parrots Pass - Kochkor - Bishkek
You will meet local today, talk with them. Then you will be driving to the capital Bishkek. You will transfer today via 33 parrots pass (3 133 m). This is a picturesque beautiful but steep road with a lot of serpentines. Along the way you will stop over in Kochkor village here you can find out how to create a national felt carpet that a local family will show you. In the tour you will discover a small handicraft museum there. The museum stores many examples of silver decorations, coats made of wolves, horse saddle decorations, carpets and more. Then you will continue driving to Bishkek city. The overnight is in the hotel.

Day 7: Bishkek -Tashkent
After breakfast you will have a transfer flight to Tashkent. You will meet the group at Tashkent airport. This day is dedicated to a city tour of the capital of Uzbekistan. You will discover Independence square, the Central square of the capital of Uzbekistan, Tashkent, where festive events and military parades are held. After that you will have a chance to stroll along the local Broadway, this is a beautiful alley with lots of paintings, Souvenirs and much more. After that you will also discover wonderful Tashkent metro, the Tashkent metro has 29 stations, each of which is an architectural monument. The Tashkent metro is one of the most beautiful in the world. After you will meander in the old part of the city: Chorsu Bazaar is a unique complex of interconnected blue domes that seem to float in the air, crowning the shopping pavilions, Kukaldash Madrasah and Hast Imam complex that consists of several madrasahs, mosques and mausoleum. Today you will also observe the uniqiu attraction Othaman Quran. You will spend the night in the hotel.

Day 8: Tashkent - Bukhara (morning flight)
In the morning you will direct to airport to have a flight to Bukhara. You are going to have a city tour in wonderful city Bukhara. You will start with Citadel Ark is the oldest archaeological monument in Bukhara. This is a former government center. Further you will discover Samanids mausoleum that is one of the oldest monuments of Central Asian monumental architecture and a monument of architecture of world significance. Afterwards you will visit Chashma Ayub that is  located in the North-Western part of Bukhara, it is considered one of the monuments of religious architecture. You will go to the shopping domes and visit Nodir Divan Begi this is an old and beautiful madrasah that is also a part of Lyabi House Ensemble. You will complete the tour with Poi Kalon complex, translates as "foot of the great", this name was given to the square in honor of the great Kolyan minaret, the oldest and largest minaret in Central Asia. It includes three buildings erected in the 12th - 16th centuries: Kalon minaret, Kalon mosque and Mir Arab Madrasah. The overnight is in the hotel.

Day 9: Bukhara
The adventure starts with exploring amazing sites of Bukhara. You will visit today Bahauddin Naqshbandi complex was built on the burial site of the great Sufi scholar-thinker Naqshband in 1544, 155 years after the Sufi's death. In the mausoleum, along with the ground crypt, there are also 2 mosques, a minaret and a madrasah, built by the decree of the ruler of that time, Abdulaziz Khan. During his lifetime, the great Sufi was engaged in metal cutting, for which he was given the nickname "Naqshband".An interesting distinctive part of his teaching was not the absolute dissolution in an ascetic and Vagabond lifestyle, but rather, staying in a full life, hard work and achieving success. After that you will visit amazing attraction Sitorai Mohi Hosa complex. The residence was built in the late 19th century. The entire complex is made with a touch of European style. Your last point will be Chor Bakr memorial complex is necropolis of the sheikhs of the Juybar Seyids, which is located outside the city in the village of Sumitan. You will drive to the hotel for overnight.

Day 10: Bukhara - Samarkand
This day you will lead to amazing Samarkand. Samarkand is one of the oldest cities in the world, the same age as Rome, Athens and Babylon. In the middle ages, it was the center of the powerful Empire of Tamerlane. You will also explore the incredible sights of Samarkand such as Registan square, Shakhi-Zindeh, Mausoleum Guri Emir and Bibi Khanum Mosque. Registan Square, decoration of Central Asia, one of the most magnificent squares in the world, which is located in the center of old Samarkand. Architectural complex of Shakhi-Zindeh is one of the most magnificent and unique monuments. Guri Emir Mausoleum contains the crypt of Tamerlane, one of the greatest conquerors in the history. Bibi Khanum Mosque one of the largest mosques in the entire Muslim world in Central Asia, it is the most grandiose. You will spend the night in the hotel.

Day 11: Samarkand - Tashkent (train)
After the breakfast you will proceed the tour with discovering the surroundings of Samarkand city. You will visit Ulughbek observatory, Mirzo Ulugbek was an outstanding scientist, poet and philosopher, but his main passion was astronomy.A great contribution to the development of Ulugbek as a scientist was made by his famous teachers and spiritual mentors - Kazi-zade Rumi, Jamshid Kashi and others. The "Zidji Guragoni" catalog of celestial bodies was compiled, the most accurate and reliable document of that time in the field of astrology. It contains information about 1018 stars and 38 constellations. Then you will also explore the local Broadway where are located souvenir shops, teahouses, sweets and workshops. After it you will visit national bazaar Siab, oriental bazaar, it does not leave indifferent either visitors or native residents of Samarkand. The Bazaar is full of goods. Further you will discover carpet factory. In the second part of the day you will transfer to Tashkent is by train. Night will be in the hotel.

Day 12: Flight
In the morning is transfer to the airport.