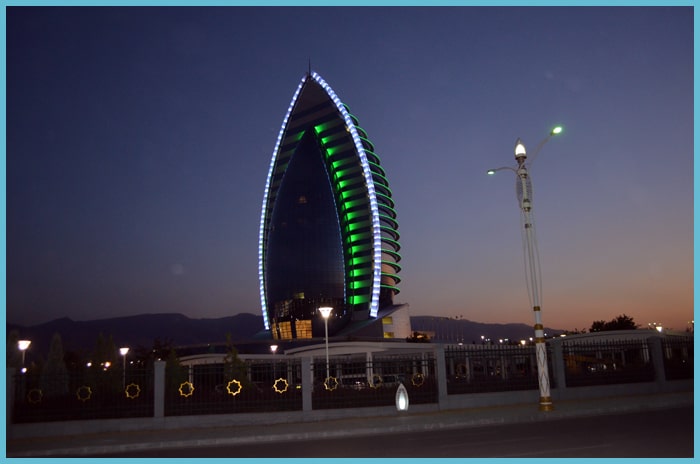 Day 1: Tashkent
You will meet today the group at airport. This day you will have a city tour in the capital. The first destination will be the main square of the country Independence square, one of the tourist attractions and the favorite place of recreation for citizens and guests of the capital, it is famous for its sights and fountains. You will also stroll in the local Broadway today, one of the most famous tourist streets of Tashkent, which connects independence square and Amir Timur square. Then you will go to Tashkent metro, interesting for its architectural style and unsurpassed beauty. After you will explore the old part of the city which includes: Chorsu Bazaar located in the Old town at the intersection of four shopping streets, it impresses with its colorful goods all year round, Kukaldash Madrasah the largest madrasah and one of the most famous historical monuments in Tashkent and Hast Imam complex that consists of several madrasahs, mosques and mausoleum. In the tour you will observe the attraction the Othman Quran. You will spend the night in the hotel.

Day 2: Tashkent - Samarkand (morning train)
Today you will lead to railway station of Tashkent for your train to Samarkand. This is a city of blue and green domes, bright facades and luxurious paintings, in a kaleidoscope of which you can get lost. This city is a real Oriental fairy tale with a riot of colors. It is as old as Rome and Babylon, and is 2,750 years old. You are going to explore today the best sights of the city: Registan square, Shakhi-Zindeh, Mausoleum Guri Emir and Bibi Khanum Mosque. Registan Square, the main square of Samarkand, which is decorated with an ensemble of magnificent ancient buildings. Architectural complex of Shakhi-Zindeh represents a monument of medieval architecture in Samarkand, an ensemble of mausoleums of the Karakhanid and Timurid nobility. Guri Emir Mausoleum a masterpiece of Islamic architecture of the Medieval East, at the beginning of the XV century in the South-Western part of Samarkand. Bibi Khanum Mosque she was the most beloved wife of the great Amir Timur and the most beautiful woman of his harem, the most grandiose mosque in all Central Asia. You will spend the night in the hotel.

Day 3: Samarkand - Bukhara (morning train)
This day you will have a morning train to Bukhara. On the territory of Bukhara there are almost one and a half hundred architectural structures that have been assigned the status of cultural monuments of the middle ages. You can also meet more modern ones here. Bukhara is considered a Museum city. You are going to have a city tour in this amazing city. You will visit Citadel Ark was once the home of the city's rulers, who made Ark their residence. The citadel also served as a fortress. After you will visit Samanids mausoleum inside the mausoleum are the bodies of three theologians, one of whom is Ahmad Ibn Ismail, son of Ismail Samani, the Builder of the mausoleum and founder of the Samanid dynasty. After you will visit Chashma Ayub received in honor of the Muslim Saint Ayub (in the biblical story - the prophet Job). After that you will visit the shopping domes and explore Nodir Divan Begi that is a part of Lyabi House Ensemble, one of the best sightseeing of Bukhara. You will complete the tour with Poi Kalon complex. There are located 3 fascinating structures built in the 12th - 16th centuries: Kalon minaret, Kalon mosque and Mir Arab Madrasah. The night will be in the hotel.

Day 4: Bukhara - Khiva (440 km, 7 hours)
After breakfast you will transfer to outstanding city Khiva. Khiva is a Museum city, one of the most important trade centers. Founded more than 2,500 years ago, according to legend, the city was founded around a well that was dug on the orders of Shem, the son of the biblical Noah. In ancient sources, Khiva already appeared in the X century as a thriving center of trade on The Great Silk Road. You will drive today from Bukhara to Khiva through gorgeous Kizilkum desert. En route you will admire the magnificent charm of the largest river in Central Asia Amu Darya river, formed by the confluence of the Pyanj and Vakhsh in Tajikistan. After arrival you will have free time. The overnight is in the hotel.

Day 5: Khiva city tour
This day you will have a wonderful city tour in the oldest city of Uzbekistan. You will explore today the inner city Ichan-Qala.  The old part of Ichan-Kala, surrounded by a powerful high fortress wall, is an open - air Museum. Ichan Kala is protected by UNESCO as a world heritage site. Administrative and religious buildings are lined with colored tiles with incredible patterns. The city is rich with old sound buildings, palaces, mosques, Madrasahs, Mausoleums, Minarets, Caravan-Sarais and Bathhouses. This is real open air museum. There are located the one of the best attractions Kunya-Ark fortress it was built in the late 17th century. This is the oldest surviving residence of Khiva khans, Kalta Minor minaret and Tash Khouvli palace, an incredible sample of Khorezm architectural mastership of 1830s. Your night will be in the hotel.

Day 6: Khiva - Shavat border - Kunya Urgench - Darwaza
This day you will have a morning transfer to Shavat border.  You will meet the group in the morning at Shavat/Dashoguz border, and then explore the architectural monuments of Kone-Urgench, Khorezm capital 10th -12th centuries. In course of the tour you will experience the Mausoleum of Najm al-Din al-Kubra, Tyurabek-Khanum, Il-Arslan, Tekesh Ibn Hadzhibey, inspection highest minaret in Central Asia KutlykTimur.  In the second part of the tour you will transfer through the Karakum desert to Darwaza. You will explore the amazing site the Gas Crater. Unforgettable impressions of the "gates of Hell" - hundreds of bonfires that have been burning here since 1971.

Day 7: Darwaza - Ashgabat
Today you will have a transfer to Ashgabat. You will check in the hotel and have free time 1 hour. In the second part of the day you will explore Bagir village, there you can discover the Parthian Fortresses of Nisa. En route you will experience Ruhy Mosque. You will continue your tour with Russian bazaar, Lenin square, Ertugrul mosque. In the evening you will also have city tour where you will observe major attractions of the capital. You will explore new parks, a huge complex with fountains and statues of the great men of antiquity.

Day 8: Flight
In the morning is transfer to the airport.

Service does not include:
- Visa
- Full board
- Migration tax
- Travel insurance
- English speaking guide
- Entrances to all museums

Note: Each Traveler should have 2 photos (5x6) to be presented at the points of entry.

Entrance fees in UZ* (with escort guide only) - 45$ per person