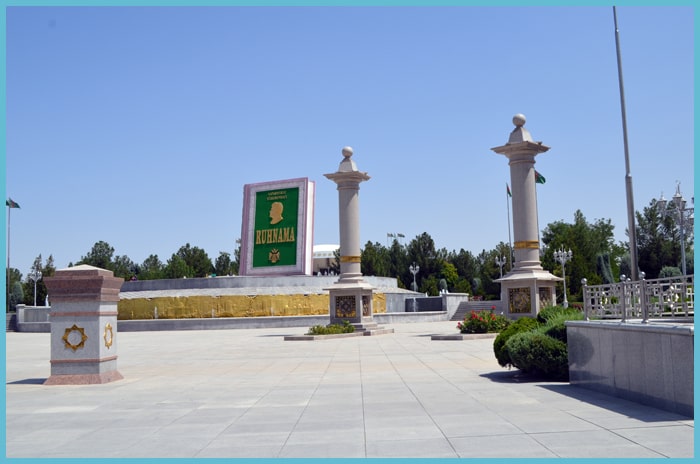 Quantity of the days: 5 days

Day 1: Ashgabat
Today you will be met by our representative at the Ashgabat International Airport. The full day you will discover  highlights of Ashgabat. The capital of Turkmenistan Ashgabat is the capital of the former Soviet Republic of Turkmenistan. Ashgabat is a beautiful city, and is included in the Guinness book of records as the city with the largest area of walls covered with white marble. The total area of such coatings in Ashgabat is 4.5 million square meters. In course of the tour you will visit: Lenin's square, Park of Independence (looking like a white-marble "Eiffel Tower" standing in a beautiful park), Arch of Neutrality. Then you will direct to Museum of Ethnography and Museum of Fine Arts. Your night will be in the hotel.

Day 2: Ashgabat - Merv - Mary
The adventure begins with driving to visit the fortress Abiverd and Ancient Merv. Abiverd hillfort is considered to be the oldest nature reserve in the entire territory of the Republic of Turkmenistan. The ancient city, or rather its ruins, can be found between Mary and Ashgabat. In ancient times, this place was called - Baverd. You will also marvel the ruins of the 15th century Seyit Jamal-ad-Din Mosque. Merv reached its greatest prosperity as the capital of the Seljukid state in the 11th and 12th centuries. In the 12th and 13th centuries, it became a major center of the Khorezmshakh state. Today you will have a highlight tour where you will visit: Gyz Gala, Erk Gala, Soltan Gala, Soltan Sanjar Mausoleum, Ibn Zeid Mausoleum. After that you will drive to Mary. Night will be in the hotel.

Day 3: Mary - Ashgabat - Darwaza
This day you will drive to the airport to catch a morning flight to Ashgabat.After that you will lead to the Northern part of Turkmenistan, village named "Bahardok" where you will observe an interesting life of Turkmen people and get acquainted with customs and traditions of Turkmenistan. After that you will drive to vivid site the Gas Crater - Darwaza. The word "Darwaza" is translated from Turkmen means "gate". This is a gas crater located in Turkmenistan. Darvaza was popularly called "the Gates of Hell "and "the Door to hell". In 1971, Soviet geologists discovered an accumulation of underground gas near the village of Darvaza. . You will find spectacular views of the gas crater. The night will be in the tent.

Day 4: Darwaza - Ashgabat - Nisa - Horse farm - Ashgabat
Today you will transfer back to Ashgabat capital of Turkmenistan and in course of the tour you will discover Nissa fortress was founded by the Parthians and for several centuries served as the fiefdom of the ruling Arsacid dynasty. In the middle ages, it became an important trade center on the great Silk Road. You will continue your tour with exploring horse farm and observing beautiful Akhal-Teke horses. The oldest thoroughbred horse breed, which was bred about 5,000 years ago by representatives of the ancient civilizations of Bactria, Parthia, and the Getae, who lived on the lands of modern Turkmenistan. You will also have a chance to have a traditional tea and observe spectacular short Akhal-Teke horse show program and the racks of horses. You will drive to Ashgabat. You will rest the night in the hotel.

Day 5: Flight
In the morning is transfer to airport.