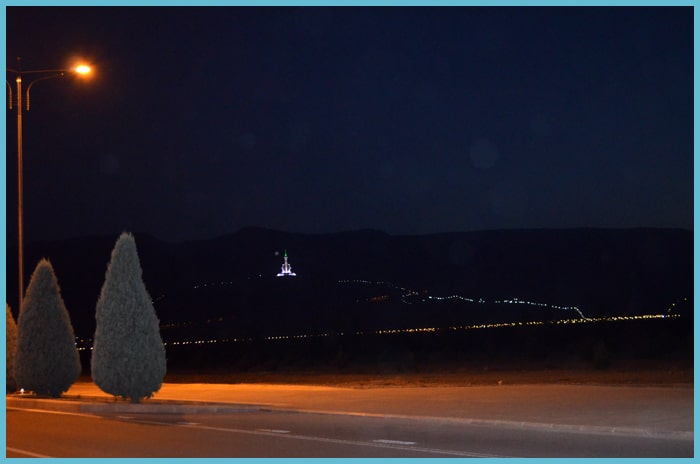 Day 1: Ashgabat
Today you will meet at the international airport. Hotel checking in. You will have today free time in the city.

Day 2: Ashgabat - Turkmenbashy
After breakfast you will drive to the Nisa the ancient settlement of Parthians. the ancient city of the Parthian state, located at the foot of Kopetdag, near the modern village of Bagir, eighteen kilometers from Ashgabat, in Turkmenistan. The ruins of this ancient city consist of two settlements: the Parthian city in the valley - New Nisa, and the Royal fortress on the hill-Old Nisa. The settlements are separated from each other at a distance of one and a half kilometers. Further you will discover the Ertugrul Gazi mosque- the largest mosque in Ashgabat, built in 1993-1998 in the Turkish style with four minarets. A bit like Istanbul's Blue mosque. It can accommodate 5,000 people at a time. In the second part of the day you will discover carpet museum where you will have an opportunity to overlook the collection of carpets of different periods.You will continue your tour with the Russian market. After exploration of Russian market catch a train to the Turkmenbashy region. You will spend the night at the train.

Day 3: Turkmenbashy - Yangykala
In the mornig you will direct to the Yangykala fire fortress. Once upon a time, this multicolored canyon was part of the bottom of a huge ocean. For thousands of years, all four elements - water, earth, air, fire - have been involved in their creation-the most skillful masters of nature. The most striking example of their work is this picturesque canyon-a landmark of Turkmenistan. Its sheer walls are painted in different colors with a predominance of red, hence the name "Fire fortress". You will have a chance to observe magnificent views and drink hot tea. After thst you will visit the Gozli ata pilgrimage place. Gozli Ata is the most remote place of pilgrimage in Turkmenistan. The mausoleum is located in a picturesque place, surrounded by pink, greenish, reddish mountains of amazing shape and beauty. Night will be in the hotel.

Day 4: Turkmenbashi - Ashgabat
After breakfast you will drive to the Kamil Ata pilgrimage and nature place where you can see the huge stones. The amazing stones of Kamil Ata resemble large giants. After you will transfer to the city. You will catch the train to Ashgabat. Your night will be in the train.

Day 5: Ashgabat
After arrival you will have chance to observe horse farm where is located the extremely beautiful horse Akhal Teke. The Akhal-Teke horse is one of the oldest thoroughbred riding breeds, bred about 5,000 years ago. These elegant and hardy animals referred to as the Golden horses, heavenly horses, the Akhal-Teke or just Turkomans. The Akhal-Teke people owe their appearance to the inhabitants of Ancient Turkmenistan, who decided to create the strongest and most beautiful horse breed in the world. And they did it perfectly. The name of the breed consists of two terms: "Akhal" - an oasis at the foot of the Kopet-Dag mountain range in Turkmenistan, and" tekintsy " - the indigenous inhabitants of this area, who are considered the founders of the breed. In Tajik, sky horses are called Ahal-teke ("Ahal-Teke") or the horse of the Teke tribe from the town of Akhal. You will visit in the tour the Gokdepe fortress. In the 19th century, Russia and Great Britain played a so-called "Big game" for geopolitical influence in Asia. You will transfer to the city. In course of the tour you will also see the Cultural and entertainment center Alem.