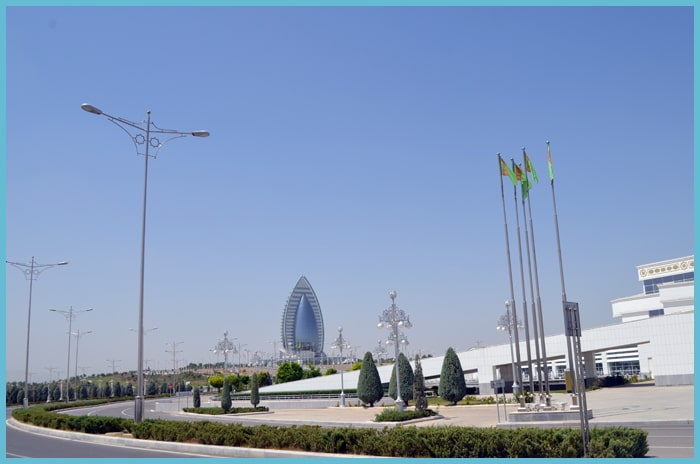 The name of tour: The magnificent capital Ashgabat

Day 1: Ashgabat
After landing you will get acquainted with local guide at the Ashgabat International Airport. After you will drive to the hotel. In the second part of the day you will discover one of the major attractions of the city. You will visit interesting place horse where you can observe an extremely beautiful breed of horse Akhal Teke, it is also called Golden and priceless, it appeared about 5500 years ago. In course of the tour you will have a traditional tea break, and overlook short Akhal-Teke horse show program and can see the racks of horses. After that you will be transferred to Ashgabat. In the evening you are going to explore different highlights. Your night will be in the hotel.

Day 2: Ashgabat
In the morning you will discover "Old Nisa"-The Sanctuary of Parhian Kings (UNESCO site), "Gypjak" Mosque and Mausoleumof the late President of Turkmenistan. You will also visit the State Museum of History. Where are located completely unique artifacts found at the excavations of the settlements Nisa, Merv and Gonurdepe, collection of vintage Turkmen carpets, rare examples of national clothing, jewelries, and antique weapons. There are also figurines of Athens, Eros, silver gilded griffin, horn-shaped ivory vessels-rhytons of the Parthian era, gold jewelries, medallions-stamps from Margiana and Buddhist artifacts. There are also a lot of fossilized piece of wood of the Paleozoic period, aged 270,000,000, dinosaurs' footprints, an 820-kg meteorite fallen in Kunya-Urgench in 1998 and a lot more. You will spend the night in the hotel.

Day 3: Ashgabat - Merv - Mary
In the early morning you will direct to the East of Turkmenistan, to Mary region. You are going to visit in your tour Old Merv (Historical Park under UNESCO protection) - Merv was not an ordinary city. In the middle ages, Merv was one of the most important cities in Islam, the capital of the Seljuk Empire, and a lively trading center. Today you will have an extremely interesting guided tour: Gyz Gala, Erk Gala, Soltan Gala, SoltanSanjar Mausoleum, IbnZeid Mausoleum. After that you will return to Mary. The night will be in the hotel.

Day 4: Mary - Talkhatan Baba - Yekedeshik Caves - Mary
This day you will start your tour with driving to Talkahatan Baba Mosque. Talkahatan Baba mosque is located in an ancient cemetery on the road from Mary to Bayramali, 35 kilometers from Sultan Kala and dates back to the XI century. Its advantage is a good degree of preservation of the monument. It was built in 1095. Then you will transfer to Yekedeshik Caves. Ekedeshik ("one hole")- an early medieval cave settlement near Tagtabazar, on the right Bank of the Murghab river. The huge cave complex has a single entrance, which made it impregnable. This cave is mentioned in many Turkmen legends and legends. In the end of the tour you will transfer to Mary city.  Yor night will be in the hotel.

Day 5: Mary - Margiana (Margush) - Mary
In the morning you will transfer to Margush to visit the 5th center of civilization. Margiana (Persian. Margush) - one of the satrapies of the Achaemenid Empire, mentioned in the Behistun inscription. The Avesta, sacred to all Zoroastrians, mentions the country of Mouru, which the Persians called Margush. Greek ancient historians, who got acquainted with Central Asia during the Eastern campaign of Alexander the great, for ease of pronunciation began to call this country Margiana, and under this name the country entered the world historical science. The first written mention of the country of Margush is known for more than 2500 years. Margiana corresponds to the territory of Eastern Turkmenistan. To the East of Margiana were the satrapies of Sogd and bacteria. In 521 BC, the marges led by Friday launched an unsuccessful revolt against Darius Hystaspes.  Overnight at the hotel.

Day 6: Mary - Ashgabat
After breakfast you will lead to Ashgabat. En route you will break at Annau, the ruins of the 15th century Seyit Jamal-ad-Din Mosque, Abiward or Abi-ward.  The ancient settlement of Abiward is considered to be the oldest nature reserve in the entire territory of the Republic of Turkmenistan. The ancient city, or rather its ruins, can be found between Mary and Ashgabat. In ancient times, this place was called - Baverd. The city often changed its name. It was called: Part, Peshtak, Part, Abaverd. Then you will drive to visit Russian Bazaar. Today you will also have a city tour. You will spend the night in the hotel.

Day 7: Flight
Night transfer to the Ashgabat International Airport to board a flight to next destination.