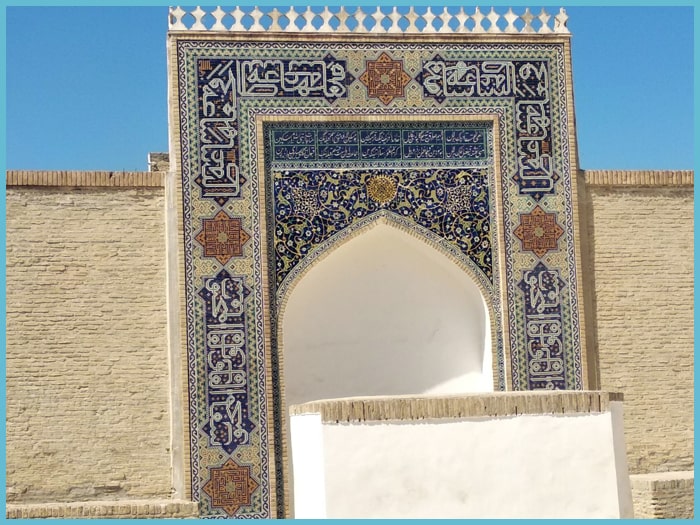 The name of tour: Classic tour to Uzbekistan

Quantity of the days: 9 days

Day 1: Tashkent - Urhench - Khiva (morning flight)
Toda you will be met by your guide at the airport. After you will have a flight to Urgench, transfer to Khiva. The entire day is dedicated to a city tour in of the most wonderful cities of Uzbekistan. You will visit the inner city of Khiva Ichan-Qala. There are various old buildings, palaces, mosques, Madrasahs, Mausoleums, Minarets, Caravan-Sarais and Bathhouses that changed Ichan-Qala into open air museum. This complex has been listed as a UNESCO protected area. All the structures of Ichan-Kala were built during the XVIII-XIX centuries, which characterize them as classic examples of late Islamic architecture. There are located significant constructions the Kunya-Ark fortress the very first Palace of Khiva. He joined the Western wall of Ichan-Kala near the gates of Ata-Darvaza, Kalta Minor minaret and Tash Khouvli palace, an incredible sample of Khorezm architectural mastership of 1830s. You will spend the night in the hotel.

Day 2: Khiva - Ayaz Qala - Tuprak Qala - Khiva
This day you are going to have tour in two magnificent fortresses: Ayaz Qala and Tuprak Qala. Ayaz-Qala settlement in Uzbekistan, dated to the IV century BC, is now a unique historical monument of the times of Zoroastrianism. Ayaz-Qala fortress is located in the Ellikkalin district of Karakalpakstan. The Toprak-Kala archaeological complex included several palaces, as well as a city - residential buildings. The approximate height of the Palace reached 40 meters. During excavations in the Tuprak-Qala fortress, the remains of a Palace with 150 halls and rooms and the Palace archive of the Khorezm rulers were found richly decorated with monumental paintings and sculptures. After the exploration the fortresses you will be transferred to Khiva. Your night will be in the hotel.

Day 3: Khiva - Bukhara
After the breakfast you will drive to Bukhara city. Bukhara is one of the ancient cities of Uzbekistan, which is about 2500 years old, it has more than 140 architectural landmarks. Over the course of its centuries-old history, Bukhara was repeatedly conquered, destroyed, and lost its international significance as a center of spiritual culture in the East. But always noble Bukhara was restored and began to bloom. In Bukhara there are streets, green parks and gardens, historical and architectural monuments that were built in different times. You will transfer to Bukhara goes via Kizilkum desert. Along the way you will fascinate Amu Darya river, the longest  river in Central Asia. After arrival to Bukhara you will have free time. The overnight is in the hotel.

Day 4: Bukhara
The entire day id dedicated to a wonderful city tour of holy Bukhara. You will visit first point named Citadel Ark the most ancient citadel in the city. It has the shape of a peculiar rectangle and since its construction has been a significant architectural monument of the state. After that you will explore Samanids mausoleum, one of the oldest historical and architectural monuments of Uzbekistan, a masterpiece of medieval Central Asian architecture. After you will head on  to Chashma Ayub, a religious building in the center of Bukhara, it includes a mausoleum and a sacred spring. It currently houses the water Museum.  Your next destination will be the shopping domes and discover Nodir Divan Begi it attracts not only with its ancient architecture and beautiful mosaic decoration, in which echoes of Zoroastrianism are noticeable, but also with its theater program. You will end your excursion with Poi Kalon complex, the significant construction of Bukhara. There are located three structures built in the 12th - 16th centuries: Kalon minaret, Kalon mosque and Mir Arab Madrasah. You will spend the night in the hotel.

Day 5: Bukhara - Samarkand
Today you will have a travel by train to Samarkand. Samarkand - one of the oldest cities in the world (about 2500 years) - the "Pearl of the East", as the chroniclers and poets of antiquity called it - is located on the territory of the Zeravshan river basin. This day you will explore the most prominent sights of the city: Registan square, Shakhi-Zindeh, Mausoleum Guri Emir and Bibi Khanum Mosque. Registan (XV-XVII centuries), one of the most beautiful squares in the world, surrounded by so many majestic ancient buildings, minarets and mausoleums. Architectural complex of Shakhi-Zindeh one of the best architectural ensembles in Central Asia, a monument of great historical, cultural and artistic value. The mausoleum of Guri Emir is one of the main cultural and historical centers of Uzbekistan. The mausoleum contains the crypt of Tamerlane, one of the greatest conquerors in the history of mankind. Bibi Khanum Mosque in Samarkand, you can call it one of the largest construction projects of its time. The night will be in the hotel.

Day 6: Samarkand
This day you will proceed discovering Samarkand city. In course of the tour you will explore Ulughbek observatory, medieval monument on Kuhak hill, which is the remains of one of the most important observatories of the XV century. Its founder is Muhammad Taragay Ulugbek, a famous Turkic astrologer and astronomer. The Observatory is known for the fact that here in 1437 they compiled the Gurgan zij, an astronomical catalog with 1018 stars.  Then your tour route will take you to the Local Broadway where are a lot of souvenir shops, teahouses, sweets and workshops. You will also discover National bazaar Siab, the largest and oldest Bazaar in Samarkand, one of the largest and oldest bazaars in Uzbekistan and Central Asia. This day you will also visit a unique handmade carpet factory one of the most significant sights of Uzbekistan, which makes it possible to follow the work of skilled craftswomen who create handmade carpets in real time.  You will also visit today Samarkand paper workshop where they make silk papers. You will spend the night in the hotel.

Day 7: Samarkand - Tashkent (transfer or train)
After the breakfast you will have a travel transfer or train to Tashkent. After arrival to amazing capital you will have a sightseeing tour in Tashkent. This day you will observe Independence square which is the important square of the country.  After you will explore the local Broadway, where artists, their works, handmade items and Souvenirs are located. After that you will discover the old part of the city which includes: Chorsu Bazaar, Kukaldash Madrasah and Hast Imam complex that consists of several madrasahs, mosques and mausoleum. One of the main sights today will be the oldest Quran copy the Othman Quran. You will spend the night in the hotel.

Day 8: Tashkent - Chimgan Mountains - Tashkent
After breakfast you will drive to Chimgan Mountains. After arrival you are going to have take the cable car to Beldersay peak 30 minutes one-way. You are going to walk here, admire the beauty of the nature, breathe fresh air and relax. You will also explore today Charvak lakeside beach where you will have free time and own water activities (as per season). Charvak reservoir is a favorite place of recreation for residents of Tashkent. Charvak is rightly called "Asian Switzerland". Clean air, magnificent mountain scenery, and well-equipped infrastructure attract tourists from all over the country. After the excursion you will transfer to Tashkent. You will rest the night in the hotel.

Day 9: Flight
In the morning is transfer to airport.