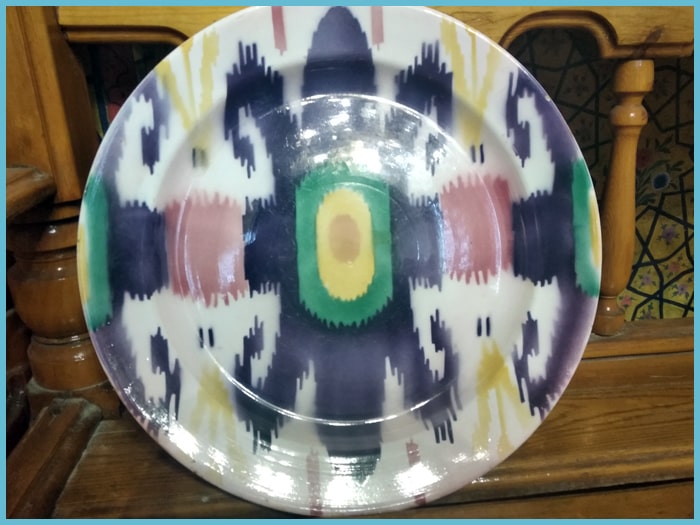 The name of tour: Fairy-tale motifs of Uzbekistan

Day 1: Tashkent
This day you will have city tour. You will start with Independence square which an interesting attraction that received its name on September 5, 1991. After that you will along the local Broadway, there are many street artists selling original works of art, handmade items, Souvenirs and beautiful fountains. After that you will take a ride in famous Tashkent metro, one of the most beautiful metro stations in the world with beautiful architecture. In second part of the day you will visit the old part of the city: Chorsu Bazaar there are long rows of artisans and a noisy crowd of people who have come here from all over the city, Kukaldash Madrasah the largest of the 23 madrassas of old Tashkent, was built not later than 1569 and Hast Imam complex that consists of several madrasahs, mosques and mausoleum. You will also see one of the best attractions the Othman Quran which is the world's oldest Quran copy. You will spend the night in the hotel.

Day 2: Tashkent - Samarkand city tour
This day you will drive to railway station of Tashkent to catch the train to Samarkand. Samarkand is one of the oldest cities in Central Asia, nestled in the flowery valley of the Zeravshan River. It is one of the three largest and most populous cities in Uzbekistan. Today you will visit the highlights of the city such as remarkable Registan square, Shakhi-Zindeh, Mausoleum Guri Emir and Bibi Khanum Mosque. Registan is an ornament of Central Asia, one of the most magnificent squares in the world, which is located in the center of old Samarkand. Architectural complex of Shakhi-Zindeh consisting of a continuous chain of elegant tombs, sparkling in the sun with blue colors. Bibi Khanum Mosque the stunning Cathedral mosque, seen from Afrosiab hill, literally translates as "the eldest Princess». You will spend the nightin the hotel.

Day 3: Samarkand - Urgut - Samarkand
Your adventure will start with transferring to a small village Urgut. Urgut village near Samarkand is known for its noisy and bright Bazaar. Famous for its ancient plane trees, which are more than 1000 years old. In the second part of the day you will drive back to Samarkand and after you will transfer to to another village where you can see memorial complex of Al Bukhary. He great Islamic scholar and hadith scholar, the life and works of Imam al-Bukhari, work on the book Sahih al-Bukhari, trials, travels and achievements of the theologian. He has another books such as Al-Adab al-Mufrad. The overnight is in the hotel.

Day 4: Samarkand - Shahrisabs - Bukhara
This day you will start your tour with transferring to the birthplace of Amir Timur, the town of Shahrisabs. After arrival you will have a highlight tour. Your first destination will be Ak Saray Palace one of the most grandiose monuments of the Timurid era of the late XIV - early XV centuries. He called here the most skilled architects and craftsmen from all corners of his domain. Also, about 50,000 slaves took part in this large-scale construction project. After you will direct to observe Jahongir mausoleum, built in the 14th and 15th centuries by the masters of Khorezm for the suddenly deceased twenty-two-year-old son Timur, it rises in the South-Western part of Shakhrisabz and is part of the Dorus-Saodat memorial ensemble, which was intended for the entire Temurid dynasty. You will end your tour with the Dorus Siadat and Dorus Tillavat memorial complexes where it was intended for the entire Temurid dynasty and was built after the sudden death of Temur's favorite son, Jahongir, in 1376. Then you will drive to Bukhara. Night will be in the hotel.

Day 5: Bukhara city tour
After breakfast you will have a full day city tour, where you will discover the best sights of Bukhara. In course of the tour you will lead the most ancient citadel in Bukhara Citadel Ark is a typical city within a city. By the beginning of the XX century, about 3 thousand people lived in the fortress. Inside were located the Palace of the rulers, Palace services, homes of servants and their relatives, a mosque, an Arsenal, warehouses, workshops. Afterwards you will head on to observe Samanids mausoleum it is one of the most revered architectural landmarks of Central Asia, built in the IX century. Further you will continue your tour with Chashma Ayub, according to legend, even before the emergence of Bukhara, the people who lived here suffered greatly from drought and died due to lack of water. But one day, during his wanderings, Saint Job visited these places. After that you will stroll along the shopping domes and discover Nodir Divan Begi it is a rectangular building with a domed cross-shaped ceiling and an unconventional elongated and narrow main portal. You will visit final point Poi Kalon complex, the construction of the complex was conceived by Arslan Khan, during the complete reconstruction of the city in the XII century. There are buildings that was built in the 12th - 16th centuries: Kalon minaret, Kalon mosque and Mir Arab Madrasah. Your night will be in the hotel.

Day 6: Bukhara
Today you will have a sightseeing tour in the surrounding area of Bukhara. Gijduvan has always been a recognized center of Central Asian ceramic production. Thousands of pilgrims passed through the revered places of "noble Bukhara", they carried the glory of Bukhara artisans far beyond its borders. The products of Gijduvan craftsmen were exported to neighboring cities and were in great demand everywhere. After that you will direct to Varahsha village, Until the XI century, there was an ancient settlement with the residence of the rulers of the Bukhar Khudat dynasty. Important battles in the anti-Arab wars of the local population took place near the walls of Varahsha. In the end of the tour you will drive back to Bukhara. Your night will be in the hotel.

Day 7: Bukhara - Tashkent
This day you will have a tour around the terrains of Bukhara. You will direct to the first point Bahauddin Naqshbandi complex, the memorial complex of the famous Sufi and philosopher Bahauddin Naqshbandi, born in 1318, is located 12 km from Bukhara. It consisted of the Sheikh's tomb itself, a mosque, a khanaka, a minaret, and a small courtyard with a Hauz. After his death, Naqshband was recognized as a Saint, as well as the patron Saint of Bukhara, in the vicinity of which he spent his entire life. A mausoleum was erected over his grave in 1544, which became a place of pilgrimage for Central Asian Muslims. Further you will discover countryside residence of Bukhara Emirs named Sitorai Mohi Hosa complex. Here you can get an idea of the Bukhara Palace interior, the structure and life of the Royal court. Then you will direct to Bukhara airport for flight to Tashkent. Your night will be in the hotel.

Flight Bukhara -Tashkent - from 60 $ per person

Service does not include:
- Visa
- Full board
- Travel insurance
- English speaking guide
- Bukhara-Tashkent flight
- Entrances to all museums