Historical and cultural heritage of Uzbekistan 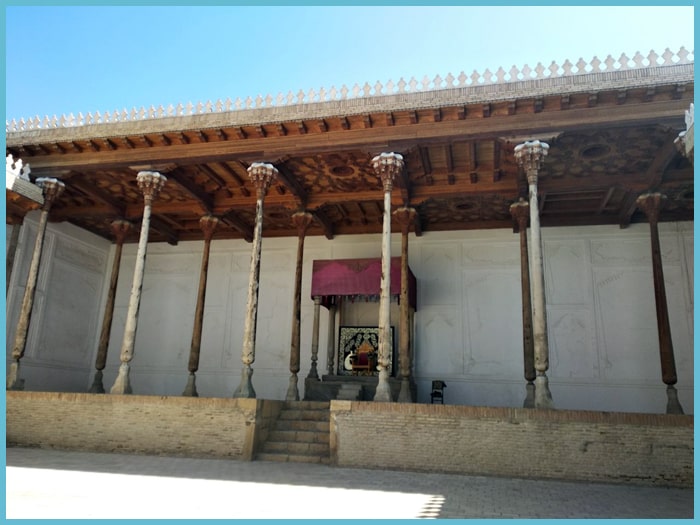 The name of tour: Historical and cultural heritage of Uzbekistan

Day 1: Tashkent - Urgench - Khiva (morning flight)
After arrival you will get acquainted with your guide at the airport and after you will have a flight to Urgench, transfer to Khiva. This day you will have a highlight tour In Khiva the oldest city of Uzbekistan.  The tour route will lead you Ichan-Qala surrounded by a fortress wall 8-10 meters high with 4 gates on the sides of the world, it is listed as a UNESCO world heritage site. The base of the mighty wall with a crenellated edge was built in the V century AD. Ancient buildings, palaces, mosques, Madrasahs, Mausoleums, Minarets, Caravan-Sarais and Bathhouses turned Ichan-Qala into an open-air Museum. There are located one of the best sights of Uzbekistan the Kunya-Ark fortress a whole city inside another city. Ichan-Kala was fenced off from Khiva by a six-meter wall, Kalta Minor minaret and Tash Khouvli palace. Your night will be in the hotel.

Day 2: Khiva - Ayaz Qala - Toprak Qala - Khiva
After the breakfast you will visit amazing fortresses: Ayaz Qala and Turpak Qala. Ayaz-Qala, IV century BC. The bronze three-bladed arrowhead found near the southern wall of the entrance maze also belongs to this era, remains of fortifications of the Kushan culture period (III-II centuries BC). Tuprak Qala, it consists of: a well-fortified city; a Palace on a high platform that closes the North-Western corner of the fortress; an adjacent section separated from the rest of the city by a powerful wall. Then you will transfer to Khiva. The overnight is at the hotel.

Day 3: Khiva - Bukhara
The tour route will lead you today to amazing city Bukhara.  Bukhara is a city in Uzbekistan, which is the center of the region of the same name and is one of the oldest settlements in the country. There are more than 140 precious architectural monuments. The city is famous for narrow streets, green parks and gardens, historical and architectural monuments. You will transfer today from Khiva to Bukhara through fascinating Kizilkum desert. En route you will discover amazing landscapes of the longest river in in Central Asia, Amu Darya. With the name of the river - Amu Darya, there is a beautiful legend that says that a long time ago in one village there lived two twin sisters and they were like two drops of water, and their names were Amuda and Darya.  When you will come to Bukhara you will have free time. The night will be spent in the hotel.

Day 4: Bukhara
After breakfast you will explore outstanding sights of Bukhara. You will discover the vivid attraction Citadel Ark the fortification has always served people for many centuries. At the beginning of the 20th century, almost 3 thousand people lived on the territory of the fortress.  After that you will head on to Samanids mausoleum, it is a square, domed building of harmonious proportions in the ancient Sogdian traditions, but using new, more durable materials. You will also lead to Chashma Ayub, it is one of the cultural heritage sites of Uzbekistan and a candidate for the status of a UNESCO world heritage site. The tour route will take you to the shopping domes and Nodir Divan Begi it was erected in 1622-1623 by the Grand vizier of Imamkuli Khan Nadir Divan-Begi. It originally served as a caravanserai. You will conclude the tour with Poi Kalon complex, which translates as "foot of the great". The complex includes three structures built in the 12th - 16th centuries: Kalon minaret, Kalon mosque and Mir Arab Madrasah. You will spend the night in the hotel.

Day 5: Bukhara - Samarkand
This day you will have a morning train to Samarkand. Samarkand one of the oldest cities in the world, it is 2750 years old. Samarkand - the ancient of Marokand - the same age as Rome, Athens and Babylon. In course of the tour you will discover the most remarkable highlights of the city such as Registan square, Shakhi-Zindeh, Mausoleum Guri Emir and Bibi Khanum Mosque. Registan Square, the main square of the Uzbek city of Samarkand, which is decorated with an ensemble of magnificent ancient buildings, madrassas, minarets, mausoleums.  Architectural complex of Shakhi-Zindeh this is one of the most impressive memorial complexes of Islamic architecture of the XIV-XV centuries. The complex is a huge burial of representatives of the nobility of the time of the Temurids. Tamerlane's grave in Gur Emir attracts the attention of connoisseurs of antiquities. The masterpiece of Oriental architecture of the Timur era impresses architects with its complexity and beauty. Bibi Khanum Mosque was built from 1399 to 1404, by order of Amir Temur, in honor of the beloved wife of his harem Bi bi Khanum. The night will be spent in the hotel.

Day 6: Samarkand - Tashkent (transfer or train)
After the breakfast you will have a transfer or train to Tashkent. In the capital of Uzbekistan you will have a full day sightseeing tour. You will explore Independence square which is the Central square of the country, surrounded by green alleys, received its name in the early 1990s. The tour route will take you to the local Broadway, a well-known attraction where cafes and shops are located, you can also find various works of local artists, souvenirs and much more. After you will head on to outstanding attractions: Chorsu Bazaar known since the time of the silk road and the Mongol invasion, it is one of the oldest shopping areas in Central Asia, Kukaldash Madrasah the largest madrasah and one of the most famous historical monuments in Tashkent and Hast Imam complex that consists of several madrasahs, mosques and mausoleum. It keeps the original of the Holy Book - the Quran of Caliph Othman, which dates back to the 12th century, it is written on processed deerskin. This relic is unique in that some of its pages have preserved the blood of the Caliph Othman himself. The overnight is in the hotel.

Day 7: Flight
Today you will have transfer to the airport.